My little brother was just about to turn 18 when he and I both attended a wonderful tattoo artist with an ex of mine, Jamie, who was having some rather extensive ink. Hec in that moment decided that for his 18th from his sister he wanted a tattoo. I of course obliged and signed the paperwork as his “responsible adult” to allow him to get the tat.

Next thoughts were, of what? Hec, being very musical, decided that it had to be something relating to music but he didn’t want a treble clef so we settled on a base clef. So it was decided and tatted on his left wrist where it could be seen when he was playing… it looked very cool! 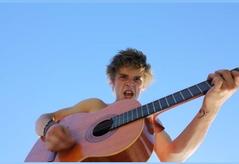 That was in June and Hec took his own life the following April.

When one of his best friends, Matty, returned from travelling, on hearing about Hec taking his own life he also got Hec’s tattoo on his wrist. So it began… the symbol to show love, loss and life. Everyone got it, including both of my parents.

More and more of Hec’s friends got the symbol on their body in memory of him.

I have mine to remind me why we started Hector’s House and also because I feel as if I have something that helps to keeps him close. When I feel like he is so far away it helps me think of him and reminds me of the “why” in our mission at Hector’s House.

It also unites others and starts a conversation. My grandmother was in hospital and stopped a young man with the base clef tattoo and started a conversation with him. “You must have known my grandson?” “I did”, replied the boy, and they both took comfort in that connection in A&E that day.

A symbol to show love, loss and life…
Lotte x