It’s one of today’s parenting hot topics – the influence that social media has over today’s teens. And we’re usually beating ourselves up over it. It’s made us think about how we were influenced when we were young and whether we need to worry quite so much about today’s online world.

In case anyone really believes that the world’s going backwards, we asked one of the lovely young adults on our Equipp panel to have a look at some of the magazine covers from the last 30 years and compare them to the kind of content they see online now. It’s been an interesting exercise!

Here’s what they had to say:

It’s well known that the messages teen girls receive from magazines – online or printed – have a huge impact on their view of themselves and even on the way they go about living their lives. Magazines have had to move with the times; I’d suggest more because they need to keep profitable than because they really care about empowering young girls. Either way, the move from covers telling women to revolve their lives around men to being more focused on the women themselves is a win. We need to be thankful that the magazine content of today is very different to that of years gone by! 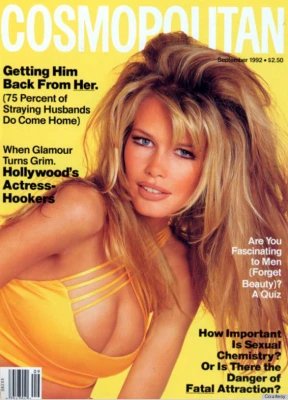 The best example of this are old Cosmopolitan covers. There are numerous questionable covers that you can check out if you Google old Cosmo covers, but the one above is a particularly bad one from 1992. “Getting Him Back From Her”, “Straying Husbands Do Come Home”, “Are You Fascinating to Men?”. Most of the fashion and entertainment magazines that our mums would have read are focused on men. Particularly, relationships with men. There will always be plenty of women who are in need of relationship advice, but the focus on women needing the advice rather than the men in the same relationships is where the issue lies.

Even more shockingly, because of the age of the target audience, take these CosmoGirl covers from 2004 and 2006. 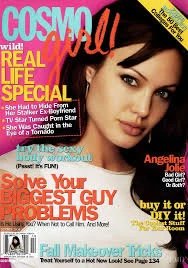 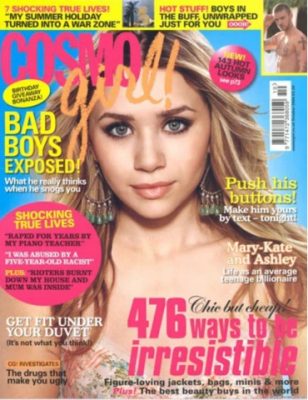 These covers are focused on boys. Both of the lead stories are based around relationships with boys. And both are promoting being in one: “Solve your biggest guy problems” so that you can be in a stable relationship with a boy; “476 ways to be irresistible” to men. Both are also incredibly focused on looks, but not in the same way as the subject is covered today. Rather than a message of self-love or body positivity, or promoting making yourself look better to make yourself feel better, rather than for anyone else, this is all focused on him: “push his buttons”, “make him yours”, “what he really thinks when he snogs you”, “is he using you”, “when not to call him”. And this is CosmoGirl, catered for young, impressionable women. If a grown woman chooses to read Cosmopolitan, they would hopefully be aware and educated about the questionable messages they’re being exposed to, or the potentially detrimental effects it might have on them. Teenagers are far more intelligent than the older generation often gives them credit for, but they are still obviously far more impressionable than adults.

Now, take a look at this CosmoGirl cover from 2019. It features themes including body positivity, female empowerment, feminist history and self-love.

However, the real ground breaker in moving on from simply telling women to be pretty and be good housewives is Teen Vogue. Now fully online, their website and their highly popular Instagram account still include makeup and fashion advice, but the focus is on the young people themselves: look good for you, not for anyone else. Teen Vogue mixes looks and celebrity gossip with news and opinion – so much so that it’s considered by some to be “nurturing a new generation of left-wing activists”. Their slogan is The young person’s guide to conquering (and saving) the world. Whatever your views or opinions, that has to be better than focusing just on looks and relationships, right?

One thought on “Let’s talk teen magazines – now, then, and all things Cosmo”