One of the reasons we set up Equipp was to champion teenagers. The more we find out about the teenage world, the easier this gets – they really are amazing. But of course, some of the cliches about difficult teenage behaviour are true. All teens at some point are withdrawn, grumpy and less than sensible, but it turns out that there are good reasons for this. It’s been fascinating to read about the science behind teenage behaviour and learn how it explains a lot of “negative” teenage behaviour.

So, we thought we’d pull together some of the facts and research that we’ve read over the past few years. We’re not experts and this is very much a layperson’s view. But, we’ve found it so helpful as parents to understand why our teens are driven to behave as they do. We’re sure that other parents will feel exactly the same way.

The science behind teenage behaviour

As a starting point, we asked our Instagram followers which aspect of teenage behaviour they would most like an insight into and this is what they told us:

Quite a challenge! But we’ve done our best to work through the list, and here’s what we found out.

Teenagers are notorious for making poor decisions and taking unnecessary risks. However, even a quick look at the science shows that there is a definite biological reason for this.

The area of the brain – the frontal lobe – that controls decision-making, impulse control and consequential thinking doesn’t finish developing until our early-to-mid-20s. So, although teenagers have well-developed emotions and feelings, a teen’s developing brain makes them more reactive in their decision-making. This are simply less able to think about the consequences of their choices. Among the last of the brain’s circuits to mature is the link between the prefrontal cortex – which controls judgement and problem-solving – and the emotional centres in the limbic system. This link is vital for emotional learning and self-regulation.

“At about age 12, the brain begins a massive shift in the prefrontal cortex, or the “thinking” part of the brain”, according to pediatrician James Chattra. “It’s going through this amazing pruning and rewiring and shift. But because of that, sometimes the prefrontal cortex that allows us to take a break, stop and think, is not working as well. About half of the “thinking” neurons in certain regions of the brain are literally “wiped out.”

Basically, teenagers don’t think before they act! And at a time when they have to experiment in order to grow up and reach independence. So it’s important to remember that this risky behaviour is part of developing their own identity. At the end of the day, it’s a normal, healthy way to behave.

We talked about this a little more in an earlier article:

The teenage years are difficult for everyone, while teens strive for independence and cope with the transition from child to adult. They need to break away from their parents and fully develop their self-identity, while going through major physical and hormonal changes.

Their brains are developing (yes, back to the prefrontal cortex again). A key part of moving away from the impetuous behaviour discussed above is testing boundaries, arguing, experimenting, and finally being able to understand the decision-making process. So, teenagers need to make their own decisions and mistakes to develop their prefrontal cortex fully.

This is often made worse by well-meaning parents confusing normal teen development and a need for space, for rebellion. It’s hard to back off and allow them to make their own decisions (and mistakes!) but it’s essential. Teenagers are going to be influenced by their peers and try to fit in. They’re going to make poor choices to get attention and place more importance than they should on social reward. For example, studies show that, unlike adults, teenagers are more likely to take risks when friends are watching.

As parents, the more we can understand what’s motivating them to push back against us, the easier it will be to work with them to find mutually acceptable solutions.

Sleeping at different times to the rest of us

This topic came up a lot! It’s hard to relate to teens staying up so late, usually with screens involved if they can get hold of them, and then struggling to wake up in the morning. But once again, there’s a clear biological basis for this and we have a great explanation from Vivienne Parry:

“Actually, this isn’t just your teenagers being difficult, for a subtle biological shift in sleep patterns occurs during puberty, probably to ensure more sleep during rapid growth. There is an increase in the level of the hormone melatonin, which is the slave of the body clock, released during hours of darkness and intimately involved with sleep patterns. The effect of this change is similar to that of shifting the hapless teen through several time zones on a transatlantic flight, resulting in their classic school holiday sleeping pattern of 2am until noon.

Come term-time, the teenage body is in disarray as it is forced by a 7am wake up call – while still on Planet MTV time – to gather itself together, even though it thinks it’s four in the morning. These jetlagged teenagers have come around by the end of the week to Parental Time Zone hours, only to wreck themselves with another bout of 2am to noon sleeping at the weekend. Many become chronically sleep-deprived, with all the implications for behaviour that implies – irritability, inability to concentrate, poor attention span – which is inevitably reflected in their school performance.”

From puberty to the end of the teenage years, the circadian clock is actually programming them to go to sleep and wake up around three to four hours later than adults. So, you can be a little more understanding now that you know how their hormonally regulated 24-hour clocks change during adolescence. That’s tough to manage, after all!

Teenagers and sleep – advice from The Sleep Fixer

Appetite and approach to nutrition

We feel your pain here! The constant struggle to keep the cupboards and fridges full is very real. And it’s hard not to mind when “what’s for dinner” is always the first thing they say to you.

It’s an easy question to answer though – they eat so much because they need more calories, especially teenage boys. They simply have much higher metabolic needs to support the major growth and development of this stage.

So, it’s important to make sure they’re choosing filling, healthy foods and understand the importance of good nutrition. Especially as they’ll be starting to buy their own food when out and about on their own or with friends. Our “Teen-friendly ways to eat healthily” article has some great ideas for simple but healthy meals and snacks that teens can cook themselves.

How they approach learning

All of the aspects we’ve already talked about have an impact on how teenagers learn.

The changes to the prefrontal cortex mean that teens can have problems in the classroom with managing their emotions, concentrating, decision-making and understanding others. There is a particular impact on being able to concentrate when distracted by negative thoughts.

The tendency towards risk-taking means that they are sometimes tempted to misbehave to gain peer approval.

Their desire to fit in means that they are less likely to answer questions or perform in public, find it difficult to ignore people laughing at them and find it harder to concentrate if they think people are watching them. Scans show that teenage brains show greater and different activity in embarrassing social situations. That painful self-consciousness is all too real and, again, it’s based on biology.

The effect on their sleep patterns means that they can suffer stress, loss of concentration, mood swings and find it hard to self-regulate. Being tired also means they’re more likely to eat poorly. Both of these can have an effect on their immunity to illness, too.

So, it’s important to properly understand what’s happening. Be as supportive as possible when they’re struggling to focus or finding it hard to navigate the school dynamic. 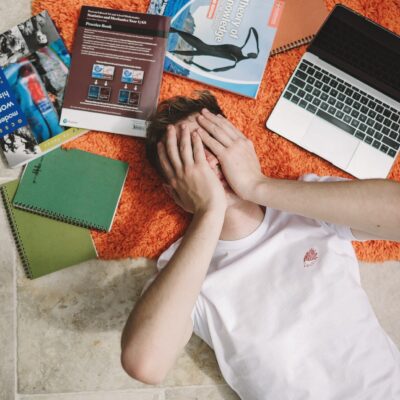 As a parent, this is one of the hardest things to deal with. Your lovely, chatty, funny child has stopped being open with you and seems to turn to anyone else instead. It really hurts.

This development isn’t driven by a specific biological change. Rather, it’s just one symptom of the massive physical and mental changes caused by puberty.

Communication with parents becomes difficult for a variety of reasons. Teenagers are afraid of being judged, they try to avoid discipline, they feel they need to make their own way. This is totally normal – you’re not alone! The teens are an age of self-discovery and it’s natural that they will start to cut ties.

So, what can you do to help? There is a lot of excellent advice out there but we particularly like this article from NBC News. We 100% agree with their advice about what (and what not) to say to your teens. “And to have someone tell you it’s going to get better doesn’t really help. Take a Zen “rock in the river” approach by acknowledging them and offering support without trying to project any outcomes, point out their role in their situation, or fix things… Create a world of acceptance for them as a person, not what they did.”

And if you want to hear another parent chatting about this subject, have a listen to Nadia Sawalha and Mark Adderly’s recent “Why don’t our teens talk to us anymore?” podcast from their Confessions of a Modern Parent series:

So, where does this leave us, as parents?

We totally sympathise with the follower who asked us “how to keep them focused and help them without being TOO MUCH”. The good news is that the many articles and research papers we read come to the same conclusion.

And that is, the more you understand about the physical changes that are driving your teens’ behaviour, the easier it is to cope. Easier to be patient, to listen, to try not to judge. Make every attempt to stay connected to your teenager by communicating with them on their terms. Be vigilant. Don’t give up.

If you’d like to read more, Frances E Jensen has some brilliant advice and answers to questions about teenage behaviour in this article on Secrets of the Teenage Brain.

And, if you’re worried about your teen, there are some excellent resources out there to help. The ‘Teen Mental Health’ section of our blog is a great place to start – we have helpful articles from guest experts and some useful insights from teenagers themselves.

We really hope this helps, and we’d love to hear from you about your own understanding and experiences. Leave us a comment below. Or send us a DM on Instagram or email us and we’ll be really happy to reply in confidence.

We’re Louise and Anna and the extra “p” in Equipp is for our philosophy: finding great gifts that make teens happy shouldn’t be so hard. We don’t over-complicate things; we make simple but stylish gifts that your teenagers will love. We’re all about championing teens, too – we love working with them and their parents. We think the current generation of teenagers is totally amazing. Oh, and every purchase from Equipp supports a brilliant teenage mental health charity.